Exposure in Digital Photography - Lighting of the Scene 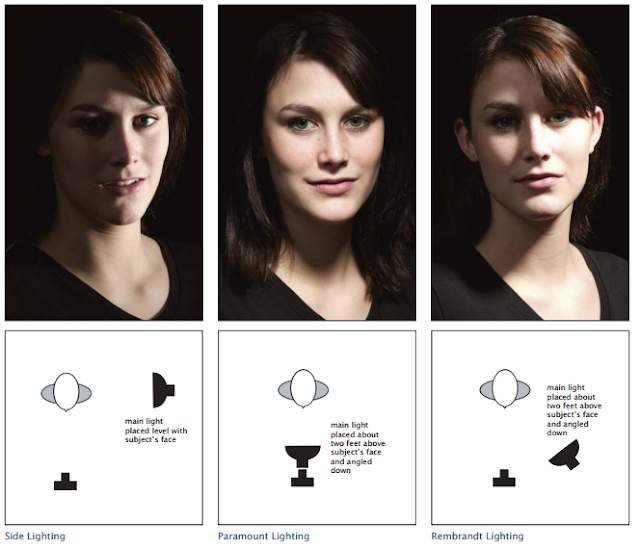 There are many lighting setups that give you a different effects. When choosing how many lights to use in a scene you need to first look at the subject. You need to chose what it is you are trying to portray in a photo. If you are going for a professional photo that you would use for a work place you would want to take a photo with equal lighting.
Incandescent, Fluorescent, Studio Strobe and LED are some of the types of bulbs that are used in the light stands. Most cameras have a built in LED light that the user can use. Large camera such as the Cannon 750D can connect to an external flash and can fire the flash from a remote place this gives the ability to use multiple flashes in one shot. In the below shot you can see the effect of multiple lights give to the highlights in the shots.

Another way you can produce a similar effect is by using a reflector which can be used to bounce light of one source to another. You can see below a shot, the light that is set up to the right of the…
Post a Comment
Read more

High Dynamic Range other wise known as HDR, is a process that is applied to the image by the camera to compensate for colour loss, it gives an image a higher Dynamic range. Below you can see the effect in practise, The picture on the left shows how a camera usually captures an image and the image on the right shows a picture with HRD enabled.

The way HDR works is by combining three or more photos, one with normal exposure, one over exposed image and one under exposed image. Depending on the lighting of the area it can make an image look more blown out. HDR is very useful in low light areas. If the camera is unable to take a normally exposed image it will instead combine the images to create an effect of normal lighting.
Before taking a photo with HDR enabled you have to remove any movement from the shot otherwise the image will come out blurry and you will get a ghosting effect. Some advanced forms of HDR are able to to combat the effect of ghosting.
To take a good HDR photo focus, …
Post a Comment
Read more

How sensors work in Digital Photography 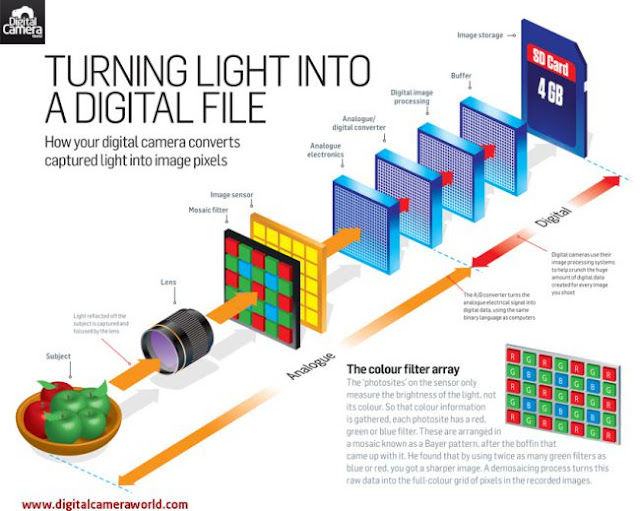 When you press the shutter release button the shutter is lifted and light is allowed into the camera and hits the sensor. This is the way it worked in traditional camera's aswell but instead of a sensor the light would be projected onto film. There are two types of sensors CCD (Charged coupled device) and CMOS (Complementary metal oxide semiconductor). Both sensors measure light and convert the analog signal into a digital signal which is then saved to the camera's SD card.
Advantages of CCD over CMOS: CCD sensors create high-quality, low noise images.  CCD sensors give greater sensitivity and fidelity. CCD have 100 times more power over CMOS sensors. CCD require a specialized assembly line to be made.
Advantages of CMOS over CCD: CMOS sensors are more susceptible to noise. CMOS have a lower light sensitivity compared to CCD. CMOS consume a lower amount of power compared to CCD. CMOS sensors are easy to manufacture and are therefore cheaper to be made.
Below is an infographic…
Post a Comment
Read more

What does the terms macro/micro refer to? The term Macro means big and the term Micro means small. If the item you are taking a picture of is small and you want it to come out as larger in the picture, then you are taking a macro shot of a micro subject.
Macro photography is generally done with a dedicated lense which you change out on your DSLR camera (Such as the nikon lense shown above). Below is an example of the detail that you can achieve from a macro lense.
The photo below is an example of a close up photograph which could have been taken with a regular lense or a macro lense from a farther distance…
Post a Comment
Read more
More posts